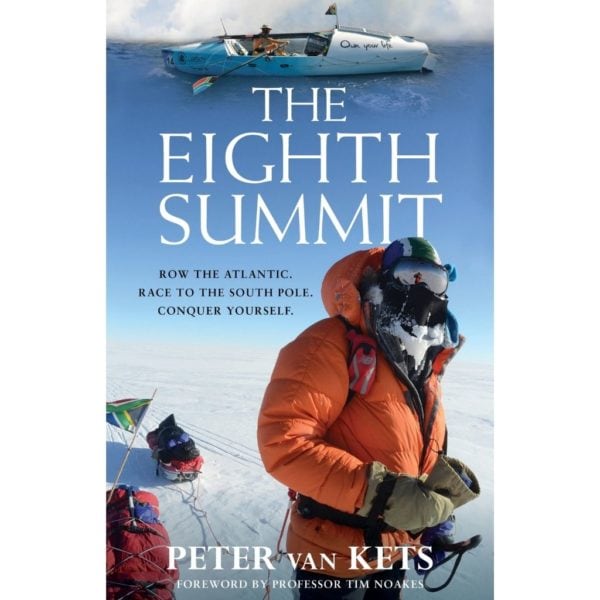 What does it take to row 5,500km across an ocean? Or to trek 500 miles through Antarctica? How do we achieve incredible things?

Peter van Kets has done this and more – and yet he could be the average guy next door. A teacher in East London with a fondness for the ocean, Peter was given a rare chance to compete in the 2007 Atlantic Rowing Race. His decision to grasp this opportunity would change his life.Together with Bill Godfrey, he rowed across the Atlantic and won against the odds. Then he came back two years later to row it alone – a truly epic feat. After that he joined forces with adventure runner Braam Malherbe to represent South Africa in the unique Scott-Amundsen Centenary Race to the South Pole, one of the most gruelling endurance events ever staged.

Peter’s feats of endurance in the face of endless ice, snow and saltwater are testament to the power of the human spirit and the greatness possible when an ordinary person sets out to do extraordinary things. In rowing the Atlantic and trekking the Antarctic, he has come to understand what it takes to conquer the limits of your mind – to conquer your Eighth Summit.

Read more
PLEASE SELECT FROM THE OPTIONS BELOW FOR YOUR PRICE

There are no reviews yet. Be the first one to write one.

There are no reviews yet. Be the first one to write one.

South African's still tend to be wary of online shopping. We're here to make the process easy and fun for you. Register for our newsletter and you will not only get updates of our specials before anyone else but you'll also get free delivery to your door.

We've been doing this for years - fasten your seat belt, make sure your seat is in an upright position and happy shopping.

Free domestic shipping on all orders over R500

Secure payment transactions for your safety and convenience

We have simple plans: Take 21 years of shop trade and mirror it online for the benefit of all customers across South Africa to enjoy.

The products sold here are representative of prices and selection in our retail shops and we’ve tried our best to bring our staff experience and opinion into your living room.

We hope you enjoy the experience.

We use cookies on our website to give you the most relevant experience by remembering your preferences and repeat visits. By clicking “Accept All”, you consent to the use of ALL the cookies. However, you may visit "Cookie Settings" to provide a controlled consent.
Cookie SettingsAccept All
Manage consent

This website uses cookies to improve your experience while you navigate through the website. Out of these, the cookies that are categorized as necessary are stored on your browser as they are essential for the working of basic functionalities of the website. We also use third-party cookies that help us analyze and understand how you use this website. These cookies will be stored in your browser only with your consent. You also have the option to opt-out of these cookies. But opting out of some of these cookies may affect your browsing experience.
Necessary Always Enabled
Necessary cookies are absolutely essential for the website to function properly. These cookies ensure basic functionalities and security features of the website, anonymously.
Functional
Functional cookies help to perform certain functionalities like sharing the content of the website on social media platforms, collect feedbacks, and other third-party features.
Performance
Performance cookies are used to understand and analyze the key performance indexes of the website which helps in delivering a better user experience for the visitors.
Analytics
Analytical cookies are used to understand how visitors interact with the website. These cookies help provide information on metrics the number of visitors, bounce rate, traffic source, etc.
Advertisement
Advertisement cookies are used to provide visitors with relevant ads and marketing campaigns. These cookies track visitors across websites and collect information to provide customized ads.
Others
Other uncategorized cookies are those that are being analyzed and have not been classified into a category as yet.
SAVE & ACCEPT

You forgot to select your pick up point!
Remember, we have pick up locations throughout the country, just pick one!

Some of our products have different colours or sizes. Simply choose for the applicable options on display to determine your price.
0
0
Your Cart
Your cart is emptyReturn to Shop
Continue Shopping